Some more blog posts from Rick in Tanzania:

Monday, 9 June 2014
The Goat Races: an absurd, ex-pat event raising loads of money for charity – all very English!
On Saturday the KCC drummers, dancers, stilt-walkers and acrobats provided the entertainment at The Goat Races (http://www.goatraces.com/).

Goats racing? Yes, you may well ask and its true, racing is not a concept goats understand. (I don’t want to stereotype them all for this, but it’s true). In the Dar es Salaam Goat Races, the goats – as in horse racing – get named (e.g. Van Goaty, a goat reputed to only have one ear), there is prize money for the winner (often given straight back as it was a charitable event) and one can bet on the races. The ‘owners’ are in fancy dress, often in twenties’ style, and get asked in semi-serious style about their goat’s training for the race. For those interested in the technical details, the goats – about ten of them are carried to the track with pomp and accompanying fanfare from a man in a kilt playing the bagpipes. The track has large boards on both sides to keep the goats in. (Being of course totally unsure what’s happening to them, they would love to escape).
When start has been called they are ushered around the track by a long pole held at knee height by their ‘stall boys’ so they can’t turn and flee. All this is accompanied by lots of hype transmitted by loudspeaker around the grounds. All very tongue in cheek, but well done, if you like that sort of thing.

Beyond enjoying the absurdity of the spectacle- titled ‘The Goat, the Mad and the Bubbly’ as one of the main points of the afternoon for a not inconsiderable minority of the spectators seems to be to get as drunk as possible – I must admit to being one of those who couldn’t quite enter into the spirit of it all. It’s clearly one of the high points of the season for the ex-pat community who turn out in force, many of them taking part actively.

One of the reasons for my ambivalence is certainly that I was on the ‘other side’, despite being a Mzungu (European/ white skinned). I feel like calling it a neo-colonial happening, where the locals are there to receive the beneficence of the ‘developed’ world (charity) and to help out (all the ‘stall boys’ were black, whilst only a minority of those in the VIP lounge were). The success as a charity cannot be denied: over £50’000 or nearly 80’000 Swiss Franks were raised. But on the other hand a lot of it would certainly have been very offensive to devout Muslims if they’d care to come (the freely flowing alcohol and the gays parading around in a country where homosexuality is still illegal, but here at this event effectively immune from arrest.) Am I being too sensitive to their feelings? The white liberal? Anyway, yesterday I could see why fanatical Islam can be seen as attractive to some.

The organisers showing their colours

Wednesday, 11 June 2014
KCC’s innovative and impressive Social Work
Readers of my blogs will by now know that I’ve been quite taken by KCC, about the great volunteering spirit, the amazing performing arts and the inordinate identification with the KCC community. Some of their social and educational work is equally impressive and especially interesting for someone who’s spent most of his working life working in these areas with marginalised groups.

Their outreach and housing work, for example. With some of the founding members of KCC having lived on the streets as children themselves, this has always been an issue close to their heart. In Dar es Salaam around 3’000 children sleep rough on the streets. Some are orphans but the majority have run away from home and school. The small KCC outreach team, led by a qualified nurse, makes contact with those in Kigamboni district and offers them first aid, food, clothes and shelter in KCC. In KCC they can cook on an open fire in the yard and at night sleep on the floor in one of the rooms which in the day is used as a classroom or practice room for the dancers and acrobats. Nothing I’ve written so far is spectacular. What has impressed me though is the subtle integration of the children into KCC and to an alternative life to that on the streets. The children are encouraged to look around, try things out and decide which of the activities they want to join in with. In one of my earlier blogs I wrote about how the homeless children were inspired by watching the acrobats practise and then started to try out the tricks themselves. After a while an older lad came along and helped them to do the exercises. All fairly informal and unstructured and – it seemed to me – thus easier for the children to accept.

The children are just there and can join in the activities much as they wish. This unobtrusive style impresses me. Some join the primary school classes in KCC, which are fast-track to help those who earlier dropped out of school to finish their obligatory primary education (this lasts as arule 7 years from the age of about 7 onwards). Although the schooling by KCC is officially recognised by the local government it makes no financial contribution to the work apart from providing the property rent-free. One of the workers, Hassan, couldn’t give me figures off the top of his head yesterday when I asked, but the ‘success’ rate – judged by the number of children who stay and don’t go back to the streets – is high.

The children get counselling and if they have parents, the KCC staff visit them together with the children. The attempts to get them to return home and for the parents to accept them again sometimes work. If this is not possible (or if it is put off for a while, as the situation for both sides is too difficult) and if the child settles in in KCC then he (rarely a she) can move into the KCC house which they call a shelter. At the moment there are three children at the shelter and six staying at the KCC centre who could move there as well. The shelter is fairly new and is in the process of getting registered officially. This should help KCC to fund the project better. At the moment, KCC struggles to get enough money to finance the work, even though it only costs around Fr.2.00 or £1.50 per day and child for food and clothing, and the volunteers – at the moment – are working for free!

The second area which has impressed me is the ‘Rehabilitation Programme’ for children who have committed minor offences. By law they cannot be sent to prison, and KCC offers an alternative which is funded by UNICEF as a pilot project. It works like this: The children are collected from the police station or courts and informed of the programme. They have to appear every day at KCC and a programme of activities within KCC is worked out for each of them every week. They also receive counselling and the KCC-team telephones or visits their families together with the children every week. A lawyer comes into the centre and talks with the children and then with the staff, also weekly.

The children’s progress is assessed after 3 months and if necessary the programme is prolonged. As it’s a pilot project it’s all being monitored quite closely. I haven’t had time to acquaint myself with the programme in detail, but it seems to be very successful and appreciated by the powers that be. As with the work with homeless children the secret of KCC’s success seems to be the informal setting with an attractive choice of things to do in an accepting atmosphere. 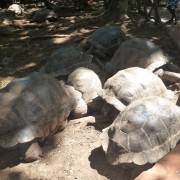 A short holiday in Zanzibar and African Child Day 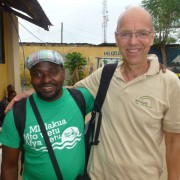 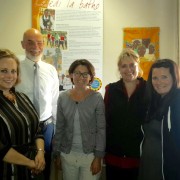 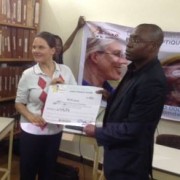 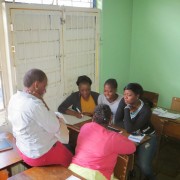